I’m aiming to do these blog diary posts from Sunday to Saturday so I can get them up on Sundays. However, this weeks, as you’ve noticed is up on the Monday (great start – yay!).

I hope you’ve had a fab start to the festive season.

It’s a cold one today, even the tree looks like if you blew it, it would just shatter. 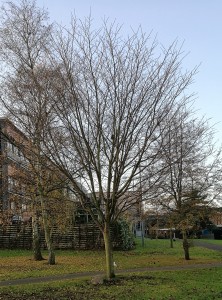 Work was fab today, a few things didn’t go the way I wanted them to but for some reason, it didn’t bother me today!

Day 1 of our advent calendars –

……………..& that’s it, the day went with ease & I’ve had an amazing start to December. Not much content but I feel like these diary blog posts are not going to be that full of content every day!

Another easy day at work, again, not everything was a breeze but 99% of it didn’t bother me & the other 1% shouldn’t have shocked me as much as it did!

My chocolate advent is delish, I do love the moo free range & the advent chocs are so chunky & tastes amazing. Todays jelly bean advent tastes unbelievable, Richard got coconut – mine was better (hehe).

Tonight, I did think about suggesting a takeaway but I was good & didn’t, I’m thinking about christmas pennies & we could spend the money on something better than a takeaway!

Morning on this glorious Saturday – burning yesterdays candle & I can’t work out if I like it or not, it’s very sweet!

Me & Richard went to the cinema to watch Fantastic Beasts & Where To Find Them, we went to the new Cineworld & throughout the movie, we kept getting a yellow/orange light appear right in the middle of the screen & after the film had finished, Richard went to tell the staff & they basically said that because he waited till the film had finished, they “couldn’t” do anything (really??)! The film itself wasn’t as fantastic as people had built it up to be! Maybe it was the cinema experience that made it so??? I don’t know!

After the film, we went for some food (completely unplanned date night), we went to a new restaurant called Loco Mexicano, not the cheapest but the overall experience (I feel) was worth it, the staff were really friendly, it only opened last night! We got a free shot of tequila.

The food was amazing, I had pulled pork taco for starter & chicken fajita for main, Richard had buffalo wings for starter & honey pulled pork burger, we both had sweet potato fries (which I love), I feel like Richard wasn’t fully impressed with his food, he said it was nice but not what he expected from the menu, mine was soooooo good. I remembered to take a pic of my starter but completely forgot about my main! I had a virgin sangria for the 1st time ever (I’m attempting to lay off the alcohol for a while, that’s going to be a tad difficult for saying it’s the festive season), it was vewy vewy nice! Hehe.

When we got home we had a mince pie.

In all honesty, I can’t hardly smell todays candle at all. My bubblegum jelly beans however, were amazing, Richards however, not so much, we think his was the peach flavour.

Well, that’s the 1st week over, I know it was only 3 days but that’s because I want to get them all done for each Sunday.

I hope you had an amazing week.

My name’s Sarah, I’m a Christian woman who lives in the Midlands part of the UK & I love to laugh.

I love to throw gatherings, I think it comes from growing up in a family that would get together for anything.

I’m married to a the love of my life, a wonderful man, who makes me laugh every single day called Richard, he’s basically the male version of me.

Read more about me